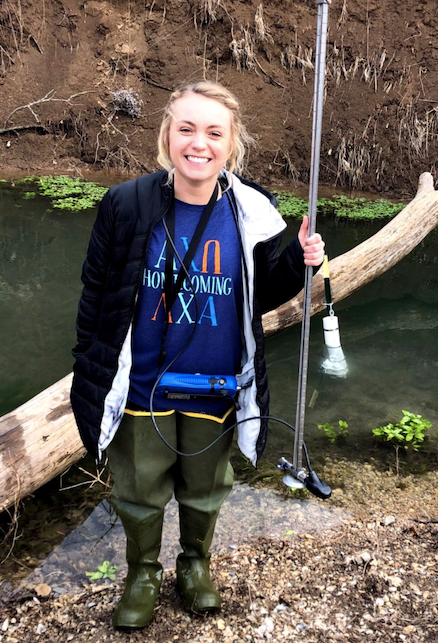 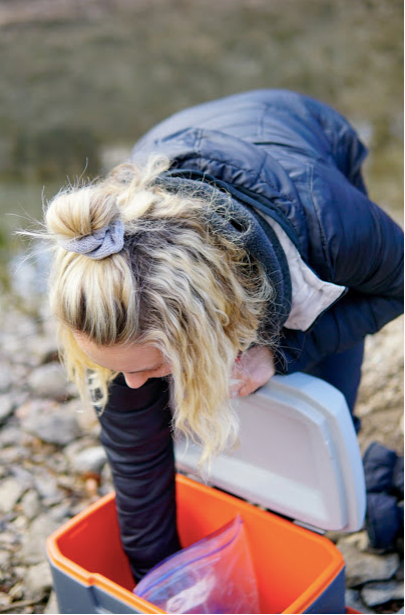 The environment, especially aquatic systems, always interested Breanna (Bre) Waterman. However, it was during her undergraduate career at Oklahoma State University (OSU) that Bre, solidified her interests in water and aquatic systems.  She said, “I had some great undergraduate professors that really sparked my interest in water quality research and provided me with opportunities to work in geochemical labs.” Following her undergraduate experience, she knew she wanted to continue on the water quality career path and entered the Geology master’s program at Kansas State University (KSU). She began working on the Kansas NSF EPSCoR RII Track-1 Award OIA-1656006: Microbiomes of Aquatic, Plant, and Soil Systems across Kansas (MAPS) project with KSU Associate Professor of Geology, Matt Kirk and his Groundwater Lab Group.

Bre’s MAPS master’s project was titled Variations in groundwater discharge and its biogeochemical impact along a precipitation gradient, and she described her research as follows:

Bre added, “I really enjoyed the fieldwork aspect of my research, and I definitely developed new lab and data analysis skills. I also really enjoyed seeing how research is carried out on such a big project between the many collaborators and institutions.”

Although Bre was born in Louisiana,  her family moved many times for her father’s military career. In 2005, her family settled in Junction City, KS which she now calls home. Bre earned her BS in Geology, with a minor in Chemistry from OSU in 2018, and finished her master’s degree in Geology from Kansas State University in May 2020. While attending OSU, she served as a Geochemical Undergraduate Lab Assistant in the Trace Metal Lab from the Fall of 2017 to the Spring of 2018, and as a Geochemical Undergraduate Lab Assistant in the Carbon Isotope Lab from Fall 2016 to Spring 2017.  As an undergraduate student, she was awarded a Nonresidential Achievement Scholarship for the Fall of 2014 through to the Spring of 2018 and an Oklahoma NASA Space Grant Geospatial Summer Fellowship for the Summer of 2017. She also made the OSU Dean’s Honor Roll in the Fall of 2014, the Fall of 2016, and the Spring and Fall of 2017, and she made the OSU Presidential Honor Roll in the Spring of 2018. She was elected to serve as an OSU Arts and Sciences Student Council Representative from April 2017 to May 2018. In addition, she volunteered with the Department of Public Works in the Environmental Division at Ft. Riley from May 2015 to August 2015. Throughout her master’s program, Bre served as a teaching assistant for KSU’s Introductory Geology and Geology 103 courses during the Fall and Spring of each year of her program and was named head graduate teaching assistant for Geology from the Fall of 2019 to the Spring of 2020. As a master’s student, she was awarded the Woody and Lynne Lee Geology Scholarship in the Fall of 2019, the Kansas Geological Foundation Student Scholarship in the Spring of 2019, and the Mudge-Thompson Geology Scholarship in the Fall of 2018. She also participated in outreach activities sponsored by the KSU Geology Department and the KSU Williston Geology Club. These outreach events included the KSU Majors and Minors Career Fair and KSU Department of Geology sponsored event, “Rocktoberfest.” Furthermore, she volunteered at the Geological Survey Association (GSA) 2018 National Meeting and at the 2019 Regional meeting.  She also presented her research posters at the Kansas NSF EPSCoR MAPS All Hands Science Meetings and the Annual Research Symposiums.

In the Fall of 2020, Bre entered a Geology Ph.D. program at the University of Kansas. She commented that prior to working on the MAPS project, “applying for a Ph.D. would have never crossed my mind, so I’m really grateful to have joined the Kirk lab group and to have met and worked with some great scientists on the MAPS project. This experience definitely encouraged me to keep furthering my education and research!” Once she completes her Ph.D., Bre hopes to continue researching and eventually reach her long-term goal of working for the United States Geological Survey (USGS).