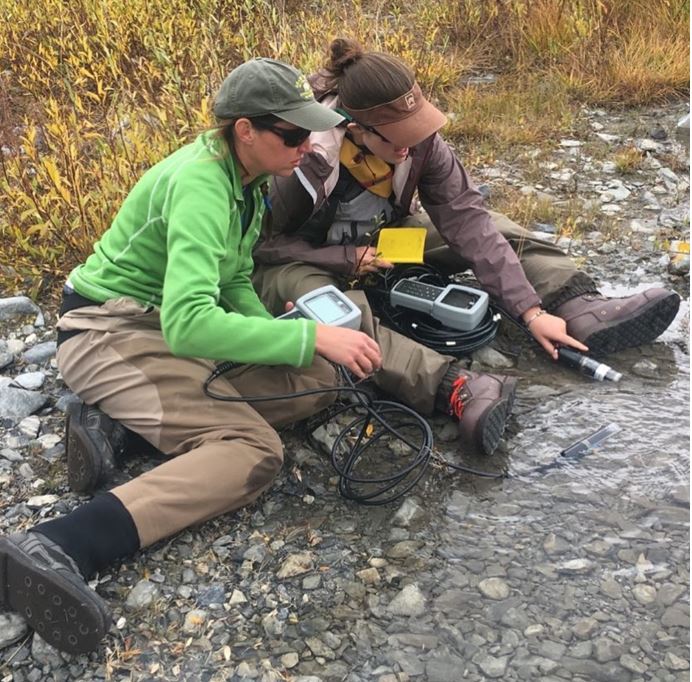 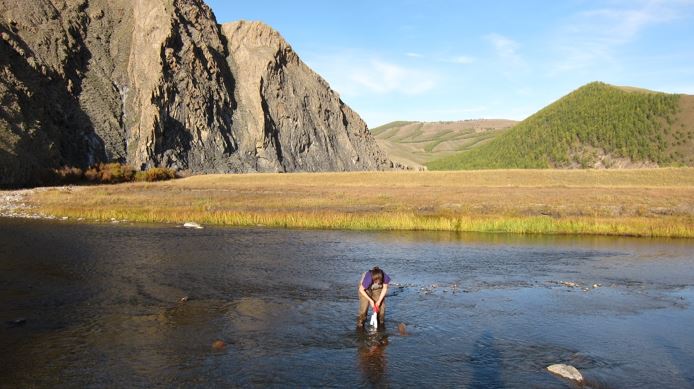 Knowing Anne Schechner loved doing river research, her undergraduate program adviser, Dr. Denise Bruesewitz at Colby College in Waterville, Maine, encouraged her apply for a graduate student research position with the MACRO Rivervine Project to work with Dr. Walter Dodds. After learning more about the MACRO research, Anne applied because she said, “I was really interested in the opportunity to work in rivers and on a topic I really believe is important. I’ve been lucky to work on river metabolism, which is a valuable metric for assessing and comparing river function. I’ve done a lot of work around improving methods in this subfield that’s been exploding in recent years. River metabolism research is important to both metabolism work and understanding the dimensions of water quality. In addition, I would get to work with people and study rivers from around the world accompanied by an adviser, Dr. Dodds, whose work I’ve been reading since my early college years and who literally wrote the book on freshwater ecology! What more could you ask for?” Dr. Dodds who specializes in environmental aspects of freshwater ecology is a Co-PI for the Kansas NSF EPSCoR RII Track-1 Award OIA-1656006: Microbiomes of Aquatic, Plant, and Soil Systems across Kansas (MAPS) as well as a Co-PI for the NSF Macrosystems Biology and NEON-Enabled Science (NSF-MACRO) Award #1442581 titled Collaborative Research: Hierarchical Functioning of River Macrosystems in Temperate Steppes – From Continental to Hydrogeomorphic Patch Scales. When Anne found out her application was accepted, she was very excited because “Honestly, it was very clear that Dr. Dodds was the expert in freshwater science, so I knew I’d get a great education.” Plus, she continued, Dr. Bruesewitz told her Dr. Dodds was a great adviser, and “the project seemed like an incredible opportunity to build a freshwater tool set, to collaborate with a dozen institutions, and to travel and conduct fieldwork in places I never thought I’d see in my life. As part of this project, I’ve seen more of the US than I ever had before grad school plus I got to work in Mongolia.” Once she arrived in Kansas, she was introduced to the Kansas NSF MAPS project and found that both opportunities, MACRO and MAPS, allowed her to explore synthetic science with scientists across various experience levels and from other continents.

Although Anne was hired as a graduate researcher on the MACRO project, with the MAPS project, she assumed a more supportive role working as a mentor for the other students on the project. She said she enjoyed this role because, “When I started grad school, I was a junior grad student on the MACRO project and cannot overstate how helpful the more senior grad students and postdocs were in teaching me about research, graduate school, and academia. It was great to walk into a network that spanned across different institutions and provided interaction with students and faculty at various stages in their academic careers. Their mentorship provided me the opportunity to turn to them for advice regarding any issue I was having, personally or professionally. Thus, when I joined the MAPS project, I was thrilled for the opportunity to pay it forward. I was excited to work with more junior graduate students, to guide them away from some mistakes I made, to relieve their worries, and to give them a boost up the steep learning curve that is grad school. I also had the opportunity earlier this year to create and lead a small workshop/boot camp for all the graduate students on the project teaching them how to use oxygen data in the form of metabolism. The objective of the workshop was to help students learn about data QA/QC and preparation and to model how to use this information, so they could skip the months (years!) it took me to figure out all those steps.” She further explained, “I trained the graduate students to ‘run with’ the metabolism protocols, which included sensor maintenance and deployment for the MAPS project. The information I provided at the workshop will save time and help the students move the MAPS and their research along.” Besides providing Anne with a mentoring experience, she said, the more specialized projects within the Kansas NSF-EPSCOR MAPS research that “I’ve been a part of me have allowed me to further develop the hard and (often overlooked) soft skills that will contribute to my success in and beyond academia.”

When asked about the focus of her own research, Anne explained, “I study variation river metabolism of the temperate steppe which includes its drivers and patterns across three ecoregions in both the US and Mongolia. I look at how river metabolism varies within a site due to both heterogeneity and methodology.  I look at how we can make more representative and comparable estimates as data become more available and how it varies temporally at sites that are part of the Kansas NSF EPSCOR MAPS project and at sites on the Kansas River.” She continued, “I love what I study and firmly believe it is critically important work to maintaining freshwater quality, which I think is perhaps the biggest issue of my generation. Anne is currently working on a publication “on heterogeneity, which shows how different habitats and reach segments could cause different rate estimates of Gross Primary Production and Respiration, as well as how different methodological decision points can influence estimates to serve as a resource for making future metabolism research and literature more replicable, consistent, and representative.” When asked about her experience working on the MAPS project, she commented, “Oh it’s been spectacular – my primary project (MACRO) has provided me with a great network though dispersed, versus MAPS which has been an incredible opportunity to dig into the state I live in, both across the aridity gradient and across the different universities and colleges on the project. It is nice to have more people researching river metabolism that I can work alongside since I’m the only student researching it at KSU. Furthermore, it has been great to get to add more mentors along the way and learn how different labs operate. For example, it is nice to have this academic stepfamily in the Burgin lab at KU, and it has also been great to be tangential to a more ‘indoor’ lab approach to this work with the microbiomes component.” All in all, she concluded, “Working on collaborative projects – both MACRO and MAPS – has had the added benefit of creating networks across universities, which I think helps make the scientific community feel a little more approachable.”

Anne is originally from New York and received her Bachelor’s degree in Environmental Science from Colby College in Waterville, ME. As an undergraduate student, she participated in both summer and senior research projects. She also served as a teaching assistant for Colby College’s Biodiversity and Evolution course. Before pursuing her Ph.D., Anne worked as an Ecosystem Data Analyst for Lake Chemistry at the Maine Lakes Resource Center. Since entering her Ph.D. program at KSU, Anne has been a teaching assistant for an Ecology course, a Principles of Biology course, and an Aquatic Ecology course. She has delivered 23 professional scientific presentations, received three travel awards and a workshop award, and has published four articles in four different peer-reviewed journals. She also is a reviewer for two journals, Scientific Reports, and Environmental Monitoring and Assessment. Her volunteer efforts include working with the KSU Girls Researching Our World program and Científico Latino as well as serving as an undergraduate presentation judge, a Policy Committee member, and a Diversity and Inclusion Committee member for the Society for Freshwater Science. Anne’s community outreach endeavors include being a pen pal for the Letters to a Pre-Scientist and Skype-a-Scientist programs, presenting to high school students, and leading the Metabolism Modeling & Data Wrangling Workshop for the Kansas NSF-EPSCOR MAPS project. This fall, Anne is starting her fifth year of her Ph.D. in the Biology Division at KSU, with a concentration in River Ecology and Biogeochemistry. Anne plans to defend in the Spring or Summer of 2021.

As for her career plans, Anne said she is looking at job prospects “outside of academia where I can use my education in flowing freshwater ecology and biogeochemistry to pursue clean water and ecosystem health aims.”