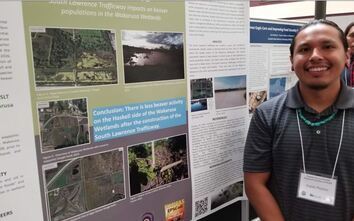 Kaleb Proctor joined the 2019 Haskell Environmental Research Studies (HERS) Institute cohort hoping to continue his advocacy for environmental and social justice and to further develop his research and writing skills.  He explained, “I feel I have a responsibility to my community, both human and other-than-human, to maintain the balance. Struggling through current issues just to make it to the next day and the next set of issues is a never-ending struggle that has been normalized. I feel it is my responsibility to address these issues.” Through his participation in the HERS Institute, he was able to focus on researching these community and environmental issues in greater depth

The HERS internship program is one of the education initiatives supported by the Kansas NSF EPSCoR RII Track-1 Award OIA-1656006: Microbiomes of Aquatic, Plant, and Soil Systems across Kansas (MAPS). The HERS Institute is an 8-week paid summer internship program where students spend six weeks on the Haskell Indian Nations University campus learning about climate change and developing individual research projects. The program is directed by Dr. Jay Johnson, Professor and Associate Chair of Geography & Atmospheric Science, the Director of The Center for Indigenous Research, Science, and Technology (C-FIRST) at the University of Kansas (KU), and Mr. Cody Marshall, Indigenous and American Indian Studies faculty at Haskell Indian Nations University.  Mr. Marshall encouraged Kaleb to apply for the HERS internship.

For Kaleb’s research project, he chose to investigate the impact highway expansion has on wetlands. Explaining why he selected this particular project, he said, “I have seen environmental injustices deemed as normal, which has never sat right with me. I want to improve the quality of life for all beings as well as be a good relative and ancestor.”  He titled his project I’ll be damned, and he explained his research as follows: “The Wakarusa Wetlands is sacred land to those living within the wetlands and to the Tribes that lived in the area pre-European settlement. Beavers are caretakers of wetland ecosystems. They help  aid water quality by connecting isolated wetlands to one another. The South Lawrence Traffic Way (SLT) in Lawrence KS was constructed within the Wakarusa Wetlands which bisected the area into two distinct ecosystems, the Haskell Wetlands and the Baker Wetlands. This divide impacted the quality of life of the species living within each newly separated ecosystem. I walked through the wetlands to document beaver activity, beaver lodges, and beaver dams and found less activity in what is now Haskell Wetlands. The SLT appeared to impede the flow of life between the Baker Wetlands to the Haskell Wetlands thus causing decreased beaver activity tin the Haskell Wetlands. Baker wetlands seemed to maintain beaver activity and beaver dams.” Kaleb documented the beaver’s activity with photographs and waypoints which were then posted onto a map of the Wakarusa Wetlands and analyzed using Google Earth.  Kaleb presented his research at the National Center for Atmospheric Research (NCAR/UCAR) in Boulder CO in July 2019. He also presented his project at the  Mni Ki Wakan (Water is Sacred) World Indigenous Peoples’ Decade of Water conference held in Rapid City, SD, and at the Rising Voices 8 conference held in Boulder, CO.

Kaleb said his favorite part of the HERS experience was “connecting with passionate people and sharing knowledge with one another. Plus, trips to the Konza Prairie Biological Station and NCAR/UCAR in Boulder, CO helped to create a community within our group and build memories and relationships that I cherish.” When asked what he learned from the HERS institute, he commented, “HERS helped me to develop my research and writing skills by writing in depth rather than assuming the reader already had background knowledge on the points I wanted to make. I also gained experience in field research, which is not something we do in IAIS; however, it will be a beneficial skill for my future research.” Then he added, “All members within the HERS program gave insight to enhance the research I conducted during the internship and challenged me to develop a deeper understanding of the issues I am interested in pursuing in the next steps in my life.” Kaleb also appreciated the mentoring he received and explained  “mentorship is a reciprocal relationship as all things can teach to those willing to listen and learn.” Kaleb’s mentors provided the balance of challenge and support that made his HERS experience rewarding.  He explained, “Mr. Marshall, my professor in IAIS classes at Haskell Indian Nations University helped open the door to the HERS opportunity. Dr. Johnson helped me develop my research question from turtles (cultural significance), to beaver (wetland keystone species). Trina helped me refine the quality of my research and my poster. Everyone in the HERS program helped guide the research I conducted and contributed to my personal and professional growth.”

A native of Tahlequah, OK, the United Keetoowah Band (UKB) of Cherokees Capital/Cherokee Nation Capital- Indian Territory that was originally Osage land, Kaleb is a member of the UKB of Cherokees in Oklahoma Tribe. In May 2019, Kaleb graduated with his associate’s degree in Social Work and is currently working on his bachelor’s degree in Indigenous and American Indian Studies from Haskell Indian Nations University. In addition to his studies, Kaleb served as president of the Social Work Club, helped to start a language revitalization club, organized the Indigenous Just Transition (Indigenous Environmental Network) / It Takes Roots (Grassroots Global Justice Alliance), helped to plan “Day at the U” a homecoming celebration, and organized the Indigenous Justice Initiative symposium. He also volunteered and cooked for KSNAF (Kansas Serves Native American Families) an organization that seeks to improve the well-being, safety, and permanency of Native American children affected by parent, family, and community substance abuse through implementing and evaluating the Strengthening Families Program (SFP), and he volunteered at the United Keetoowah Elder Center and the Just Food organization.

Upon graduation, Kaleb plans to work for the  United Keetoowah Band of Cherokees in Oklahoma. In addition to the expected job’s responsibilities, he hopes to lead workshops and develop programs to enhance the well-being community while building relationships “with passionate people focused on helping the people and the land.”