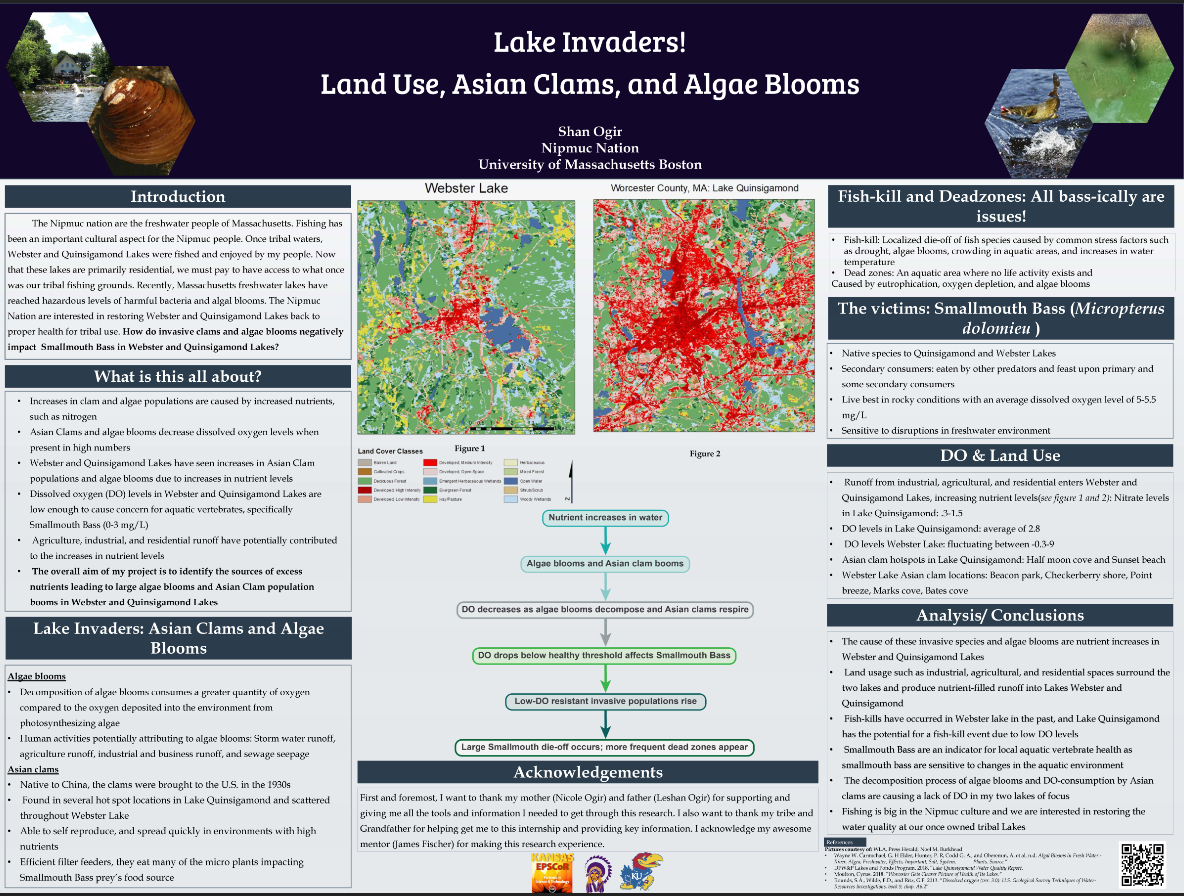 One reason Shan Ogir chose to study bodies of water and marine life was “the lack of knowledge and understanding we have for aquatic species.” He continued, “All bodies of water intrigued me growing up and that led me to pursue a bachelor’s degree in biology at the University of Massachusetts -Boston.” Last summer, Shan attended the Haskell Ecological Research Studies (HERS) Institute, a workforce development initiative of the Kansas NSF EPSCoR RII Track-1 Award OIA-1656006: Microbiomes of Aquatic, Plant, and Soil Systems across Kansas (MAPS). The HERS Institute is an 8-week paid summer internship program where student interns spend six weeks on the Haskell Indian Nations University campus during June and July, learn about climate change, and develop individual research projects. Dr. Jay T. Johnson, Professor and Associate Chair of Geography & Atmospheric Science, the Director of The Center for Indigenous Research, Science, and Technology (C-FIRST) at the University of Kansas (KU) and Mr. Cody Marshall, Instructor at Haskell Indian Nations University, supervise the program. Shan added, because “my tribe, the Nipmuc Nation, are the freshwater people of Massachusetts, I chose a research project that would enhance my tribal ecological knowledge and allow me to bring it home.”

The title of Shan’s research project is Lake Invaders, Land Use, Asian Clams and Algal Bloom sand he described his research as follows: “Huge issues with water quality have been occurring due to a multitude of factors such as pollution and sewage dumps, and they have negatively impacted ecosystems, animals, and humans. Massachusetts freshwater lakes have reached hazardous levels of harmful bacteria, surged in algal bloom growth, and experienced an increase in invasive species occupation (specifically Asian Clams). Infiltration of nutrients, such as nitrogen, have caused toxic algal blooms to increase in intensity and have allowed invasive species to thrive in freshwater bodies. I used Data Analysis from the Webster Lake Association (WLA) and discussion summaries from the Lake Quinsigamond Comssision (LQC) to discover and understand the threats each of these pose to Massachusetts’ water quality. Then, I compared methods that other states are using to prevent the infiltration of nutrients. I wanted to find potential solutions and restoration methods that are simple, effective, and directly impactful as well as interchangeable between fresh and saltwater. I chose the most environmentally friendly methods to address these issues to study and presented them as a potential solution to the Massachusetts water quality problem. Also, I am designing a natural filtration system using native plants from Massachusetts to prevent nutrients from entering from the shorelines, and I am incorporating my research from the HERS internship into my tribe’s youth group activities.” Shan’s mentor and research advisor for his project was James Fischer.

When asked what he learned from his HERS experience, Shan said, “I learned how to apply tribal ecological knowledge to science and how to conduct research effectively. I also learned how to present research in a way that catches the attention of an audience and that is easy for everyone to understand.” His favorite part of the experience was “The fieldwork we conducted in Kansas and Colorado. I would say I learned the most in the field from the hands-on research we were doing.” He continued, “The HERS program provided some of the best and most interesting months of my life. Being able to network with other Native Americans from other tribes was eventful and a huge learning experience. The HERS staff, advisors, and mentors did an awesome job of giving us the tools we needed in order to conduct our research, refine our writing skills, and make the program interesting. Overall, it was one of the best experiences I’ve ever had.”

Shan was born in Rhode Island and was raised in San Diego. Currently, he is finishing his sophomore year at the University of Massachusetts–Boston and is “prepping to join the Navy to work for a Spec-War contract and to eventually become a Navy Seal.” He hopes to pursue a graduate degree in the future as well. In his spare time, he volunteers as a Youth Program Advisor for the Nipmuck Cohort, Nippeash Waapermooash, in Grafton, MA and enjoys diving. In addition, he is a National Taekwondo fighter ranked 36th in the country, and he teaches Martial Arts.

Workforce Development, Education and Outreach funding for the HERS Institute is provided by the Kansas NSF EPSCoR RII Track-1 Award OIA-1656006 titled: Microbiomes of Aquatic, Plant, and Soil Systems across Kansas. The grant’s workforce development and educational objectives are designed to enhance STEM education in Kansas by supporting activities that will lead to an expanded STEM workforce or prepare a new generation for STEM careers in the areas of aquatic, plant and soil microbiome environments and ecological systems.